My first review of the year! Isn’t this wonderful! And I’m already technically ‘1 book ahead of schedule’ on my GoodReads challenge! << It’s early days but o well, lets celebrate this accomplishment for now! This also means that I’ve made a step towards completing one of my 2015 resolutions (Finish 4 Series/Trilogies) and marked a book off my Winter and January TBR! =] *happy dance* 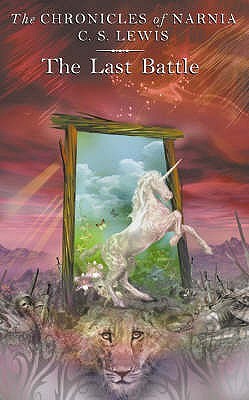 Quickie Review [Non-Spoiler]: 2 out of 5 stars on GoodReads.
This was definitely the weakest out of all the books and for several reasons. I think if I had read this entire series when I’d started it (age 12, almost 10 years ago!) I would’ve enjoyed it more because I was less aware of things than what I am now e.g. racism and the fact that the books are heavily reflecting religions such as Christianity. Minor problem that I felt are; it didn’t feel like a Narnia novel, it ended weird and unsatisfactory and the character of Tirian was underdeveloped as well as my one problem of not being able to read the name Tirian and not not think of Tyrian from Game of Thrones xD

But onto the more major problems I had:

One, it started off at a weird point and for most of the book I didn’t feel like I was reading a Narnia book.
Second, C.S.Lewis kept writing ‘I cannot describe to you how (such and such) was but (and goes on to describe it pretty much anyway)’ which really annoyed me.
Thirdly, I didn’t feel like anything happened really, and there was no excitement for me in it.
Fourthly, it was written really poorly. Several times I felt sentences didn’t make sense and I’m pretty sure I had no problem with an of the language and possibly dated sentence structure in the previous books.
Fifthly, it was racist so many times! I completely understand ‘but at the time it was fine and normal’ but like I was honestly shocked that ‘darkie’ and such were in the novel!
And finally, it got all very weird at the end and I didn’t like how it finished. I mean, it was clearly obvious that they’d all died but it was like the mystery that was revealed that didn’t need to be revealed and it just ended like ‘yeah you’re dead. The end’ and it’s like ‘why aren’t they shocked?! Can you really just write that and feel like it’s a satisfactory ending?’.

So not a great start to the new year but at least it wasn’t a book I hated right?

Have you read this book/series? What did you think? Let me know in the comments below!