In celebration of season 5 coming out tonight I thought I’d do this tag!

1. How did you discover the series/book?

Honestly, I saw the TV show first. I think I saw the first 2 seasons in early 2012 and I was just like ‘eh, I don’t get the hype’ watched season 3 as it aired and again, didn’t feel all that interested in it. Even during the red wedding, I wasn’t shocked and just sat there bored like ‘meh, glad they’re dead’ but for some reason Season 4 hooked me and I’ve since rewatched the previous seasons and started the first book last year and love it. I think it’s because I’m older now and understand politics a lot more and understand that fantasy isn’t always about constant magic and fantastical things.

2. Who is your favourite house apart from the Starks and Lannisters?

I don’t particularly like those two houses nor any other house…. I just have favourite characters like Arya, Tyrion…. Who else is decent …. Haha o dear xD Brienne, The Hound… Jon is…. sometimes cool… But I don’t really have a favourite house. Although House Greyjoy have a squid as their emblem ❤

3. Who is your favourite character from the House of Stark?

Arya. Sansa can go jump out the moon door seriously. 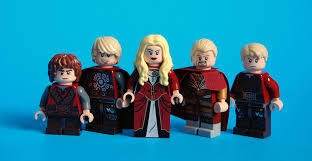 4. Who is your favourite character from the House of Lannister?

5. Who is your favourite character?

6. Who is your least favourite character?

7. What are your thoughts about the series/book?

What I’ve read of the books so far… honestly? Not exactly the best written book I’ve read, but the info in it is extensive and it’s definitely interesting to read.

8. If you could be one of the characters who would you be and why?

O jesus…. Who lives in the end? and isn’t raped or thrown into battle nor loses an arm nor dies but then comes back. I wanna be one of that character!

10. Who is your Game of Thrones crush?

Hmmm…. Who I find the most attractive… Oberyn xD

11. What are you most looking forward to in the upcoming season/book?

Dany and Sansa dying. I wait the probs won’t happen -_- besides that… I am seriously looking forward to Arya and Tyrions travels and also if the White Walkers make another appearance! =]

Hope you enjoyed that!

One thought on “Game of Thrones Tag”