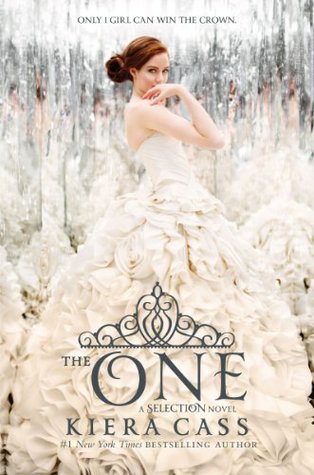 I finally got around to reading this book!

Quickie Review [Non-Spoiler]: 2/5 stars on GR.
This series had so much potential but it fell short and into predictable hands. This book could’ve gone anywhere, shit could’ve gone done, HUGE reveals could’ve happened, her dad has SO much more potential too!, relationships could’ve really fucked up, but what I got was something safe and predictable. I never felt the characters were in danger, I never felt the ending was going to be anything but what it actually ended up being. Disappointing… There was no danger, mystery, suspense which made it boring and even more predictable.

But there were some cute moments, for example the relationships and moments between the girls of the selection; loved those moments!, and the queen was always sweet (although she’s pretty passive, that frustrated me) and some of Maxon and America’s moments were cute, especially the rain and photo scenes.

However, most parts that should’ve been expanded (rebellion, world-building etc) were too short and parts that should’ve been short (the ENTIRE selection and the romance and the decision making on the romance) were dragged. This could have easily been a duology as it dragged hella long. Or could’ve been a trilogy with more of the rebellion, war and world-building, because to be honest, that was the most interesting part! America doesn’t annoy me as she has done for most reads but she’s definitely a dumbass, immature, selfish and undeserving of both Maxon and Aspen.

Will I carry on? No. For me, this was a trilogy not a series and I’ve had quite enough of it. Meh, it was an okay but it fell flat from the huge potential is had.

Did you read this? What did you think? Carrying on with the series? Let me know in the comments and/or link me to your The One review!

One thought on “The One by Kiera Cass”